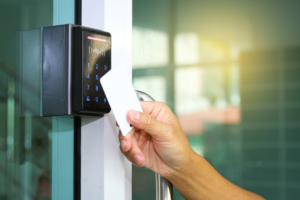 In any enterprise setting, access control is a necessary measure to allow different levels of privilege based on identity. Both in the physical and digital spaces, access control measures must be set in place, ranging from simple passwords and 2-step authentication measures, to biometric and RFID triggered entryways. This area of security is often overlooked and under-budgeted for in place of surveillance and alarm equipment, even though access control is more effective in preventing losses as it addresses the issue before it happens instead of trying to catch actors after the fact. There is certainly no question that it makes more sense to stop an issue before it starts, and properly implemented access control measures are the first step in this direction when planning and installing an all inclusive security system.

Auto dealerships and construction areas tend to be very attractive to criminals. With the merchandise kept outside and typically valued well into the hundreds of thousands of dollars, theft and vandalism are some major, though not the only problems that auto dealers site managers have which can be addressed in the best way through a high quality video surveillance and access management security system. In the case of construction or building renovation, both tools and hardware can attract theft, as surveillance is less expected in incomplete buildings and structures. Still, those in control of these sites often fail to properly secure them, under the impression that construction zones are less attractive to thieves than completed buildings.

In addition to the previously mentioned access control technologies such as biometrics and RFID locking systems, having an always on feed or system of video feeds allows the entire facility to be checked up on through virtually any device. Systems can be designed which let any intruders know they are being observed and which advise them to leave before the police are called. This is known as a “talk-down” response, and in many cases can prevent a theft in the act and mitigate any further damage or losses. Some customers have also found it useful to be able to check up on live developments remotely during times at which they could not have a physical presence.

By installing or adapting such a system to your business, 24/7 reassurance can be had. What are known as “remote security guards” are able to not only record the goings on of the dealership or other areas of interest, but also to participate directly in the protection of your property, and give direct line of sight to what is happening at any given time. Facial and body language recognition software can watch for the presence or absence of everything from people and faces to the cars or items of concern themselves. This allows a quicker response to potential threats than has been available conventionally.

When working in concert with access control systems, IP enabled cameras are capable of not just loss prevention and denial of access to non-personnel, but creating a holistic approach to management of an entire property from a distance. Using a system of RFID key or card fobs, it is possible to know who accessed your building and when, creating a deeper system of accountability among your employees, insuring jobs are completed and schedules maintained, and preventing internal theft.

STST is proud to offer systems like this as well as the design professionalism necessary to integrate it into existing security platforms and new projects alike. Products such as Avigilon Blue are leading the way for quick and comprehensive deployment of modern access control and video surveillance on top of existing infrastructure.