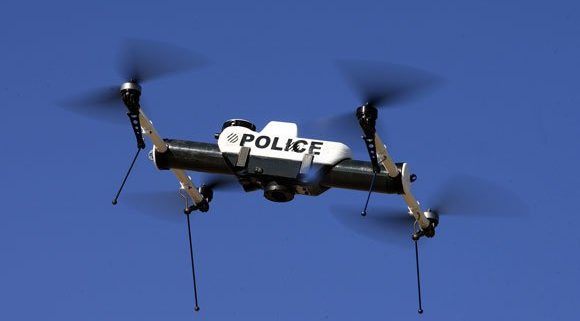 The use of drones for surveillance is no longer confined to the pages and scripts of sci-fi stories. While it is true that we have been using sophisticated camera systems combined with flight to spy across the Ocean at least since the development of the U2 program during the Cold War, it is the addition of modern “IOT” style tech to this equation that has opened the possibility for open (or closed) networks of semi-autonomous security devices to be used in securing important locations.

The advent of the “smart-phone”, for instance, brought with it some pretty serious improvements to the types of technologies you might want to strap to a drone. Global Positioning, high-efficiency LI-ion batteries, megapixel IP cameras, bluetooth and wifi ; As far as the hardware is concerned these are the same types of tech we already use in high-end “ground-level” security systems, such as IP cameras, decentralized computing and storage. The promise of a mobile platform such as a drone is not necessarily in its hardware, but in the possibilities afforded by moving the element of human observation and choice to where it is needed in the most efficient manner.

It is the writer’s opinion that these devices will eventually be absolutely essential in high security of the future, as the advantage that having a GPS/GLONAS based waypointing system and an LTE connection attached to a quadracoptor with a camera and a piece of software telling it what to watch for can gift overall operational security in large outdoor areas is significant. As a consumer, I can purchase a drone that can track me as I move, hit several points in a row and return to me, and fly several kilometers on one charge. There are features that allow some devices to return  “home” when faced with a battery with just enough life left to get to the charger.

In some ways, it doesn’t sound particularly incredible on paper. We have had cameras attached to flying machines for decades. Drones have been used to survey large swaths of farm and ranch land and to manually patrol other areas where a human element is needed as part of the security presence.

It is more the marriage of the architecture of our cellular ecosystems to the increasingly affordable and scalable hardware that stands to be a game-changer for certain sectors of the industrial security market in the near future. STST has already implemented systems which can differentiate between human activity and other types of on-screen movement, and it is this sort of tech, working in tandem with global positioning routing software that could help realize a new standard for securing large areas during times where no one should be there.

For more information on access control systems for your facility contact Security Technology of South Texas, Inc. at:   www.gostst.com or call (210) 710-5881