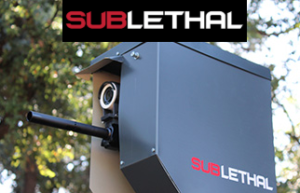 A company out of South Africa has introduced a unique product for those looking for an alternative to human security presence. The Sublethal Remote Gun is a non-lethal weapon mounted and connected to a camera that allows the user to engage an intruder without being on-site. These remote weapons are designed to fight back against intruders while keeping the user safe. Here we will take a look at the specifics of this security alternative.

The primary weapon is a paintball gun using nylon rounds. It is designed to be similar to the rubber bullets used in riot control – causing extreme pain without being life threatening. It is not recommended to use regular paintballs, but frangible solid casing pepper balls can be used. The magazine holds up to 155 rounds just under the size of a US quarter. The gun is difficult to disable and in most cases is mounted on a pole of nearly 20 feet, able to fire down the pole to protect itself from tampering. In the event that real ammunition might be used against the gun to disable it, upgrades to the casing are offered to make it resistant to small arms fire.

The gun is very easy to use and requires only a few minutes of training. Because of this, every controller has a key to lock it down and prevent young children from accessing it. During power outages, the sublethal gun has a battery that can keep it running for 3 days, depending on level of use. Under tests the gun often lasts up to 7 days on a deep battery cycle. A solar panel and solar charge controller can also be fitted to ensure the gun remains functional during an outage.

The system is built to be modular but it has not been tested with a lethal firearm and the company does not endorse or assist with such a modification. Although the weapon is designed and sold in South Africa primarily for defense of farms, many other possible installations are suggested by the manufacturer. These include what may be a somewhat optimistic list to include everything from households and businesses to server rooms and casinos.

As a deterrent, the gun has some advantages over a human with a lethal weapon. By engaging from a distance, the risk of physical harm to the user is removed and gives the defender a disproportionate advantage. The intruder stands little chance of winning a fight against a machine and being repeatedly struck by riot suppression rounds is highly demoralizing. Furthermore, the legal risk of using a firearm on a criminal is eliminated. In South Africa, if a criminal intruder is killed the police force must open a docket for murder against the homeowner. This will result in confiscation of their firearms for ballistics tests and a requirement for them to appear in court. Especially if the criminal was unarmed, the property owner may unfairly face significant jail time simply for defending themselves and their land. The sublethal gun requires no license and has a low chance of permanent injury.

In the long term a remote gun like this is orders of magnitude less expensive than a human security guard. The guns can be used as a force multiplier to reduce these costs and engage several armed intruders. Especially in the case of farms and homeowners, this may be the only type of weapons system appropriate and affordable. Most do not have the resources to employ 24 hour security.

The up front cost is $1499 per system to include the weapon, controller, rounds, and hardware to mount. Paired with alarm activation on a cell phone or other mobile device, the gun can be made more useful, as unfortunately it is not automatic and requires the user to operate it. The gun works on the cellphone network and does not require WiFi. Through GSM, 4 alarm zone inputs can send an SMS message to the user when triggered. These relays can be used to activate sirens, flood lights, pepper spray dispensers, gates, smoke dispensers and more.

While the manufacturer designed the gun as an answer to the problem of crimes against farms in South Africa, it does seem that delivery outside of the country can be arranged. This would of course mean self-installation would be required. The utility of the gun is certainly up for debate, but as an addition to existing security measures and for its relatively low price there is an argument to be made for its use. As an answer to the desire for a remote weapon attached to a camera, the gun might be seen by many as a half measure. Perhaps in the future such a system could be made to detect human presence in off-limits zones and fire automatically.

Year 2020: Security Threats in the Coming Year IoT Moving Into 2020
Scroll to top