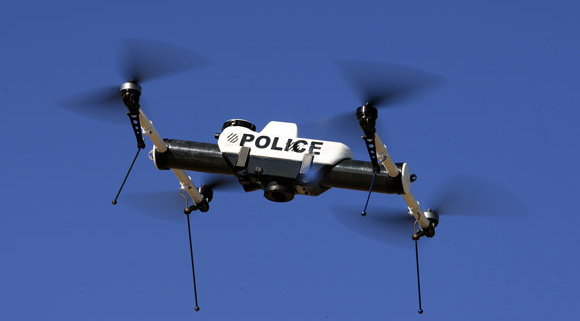 The term “AI” is becoming a bit of a buzzword lately, but pairing it with drones to perform a specific task is exactly the kind of real-world application for which the kind of narrow AI that we have now is best suited. Reseachers used a drone to transmit video via 4G internet so as to allow real time analysis and processing. The algorithm, which was trained using deep learning, an AI approach used especially in image analysis, was taught to recognize 5 types of agressive poses.
For the purposes of the study, the AI was trained on strangling, kicking, punching, shooting, and stabbing. This was done by filming volunteers performing these acts in an exaggerated way. In the beginning, the volunteers are spaced apart, but move closer together over time.
The system reached a 94% accuracy rate, though that number dropped to 79% as the number of people in the frame was increased. The next step is of course to begin to train the system on real-life events. It is thought that in the very near future, systems like this will be used on a considerably larger scale to detect crime in public spaces and at big events. Inspired by the Manchester Arena bombing of 2017, the system’s developers believe that by actively watching for suspicious behavior in this way, terrorist attacks outdoors might be stopped in time.
Security Technology of South Texas does not offer still experimental technology, for now. Please contact us through email at admin@gostst.com on our website or via phone at  210-446-4863   24/7
https://secureservercdn.net/198.71.233.86/imd.ff0.myftpupload.com/wp-content/uploads/2018/06/4511837_orig.jpg?time=1652878345 325 580 Evan Youngman https://secureservercdn.net/198.71.233.86/imd.ff0.myftpupload.com/wp-content/uploads/2018/04/STST-Logo_Mst_rgb_wName.svg Evan Youngman2018-06-27 16:29:222018-12-06 06:00:17Using Drones to Identify Violent Behavior in Crowds

Intersection of AI, Drones, and 5G
Scroll to top