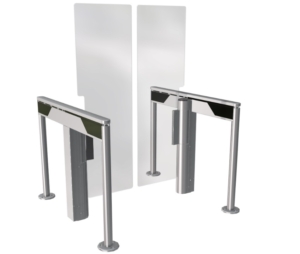 With many municipalities pushing through ongoing restrictions and ordinances governing social distancing and COVID related guidelines, many companies are facing a difficult reality; comply or fail. Serious fines and health department shutdowns have been seen for those who fail to accommodate restrictions on people spacing and masking, and so, companies are left with little choice. For some, this may mean cameras with the ability to detect crowding and masks, but for those with a high volume through a secured area, the solution is a contactless turnstile. These turnstiles read credentials without contact and ensure compliance with remaining socially distant and out of contact with others.

The SlimLane 950 double swing door security entrance lane offers a high bidirectional throughput and uncompro-mising security. With its transparent, elegant design and minimal footprint, the SlimLane 950 is designed to integrate perfectly into any architectural style. Its wide lane ensures easy access for people with reduced mobility, wheelchairs, large carts or wide objects. Equipped with high processing capacity and an exclusive detection system, the SlimLane 950 guarantees accurate user tracking and prevents any unauthorised use.The SlimLane 950 is a modular product that can be installed as a single or a multi-lane array and can also be combined with the SlimLane 940 standard lane model.

Its features are designed with our new world in mind and include: 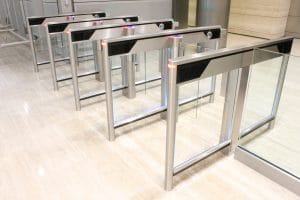 Brushed #4 AISI 304L stainless steel housing is used for the panels, housing, and frame that accesses the internal components. It uses electromechanical drive units with a controller providing progressive accelerations and decelerations of the obstacle, for smooth movement and enhanced user safety. To prevent forced entry, the geared electromagnetic brake will lock down the obstacles in place.

This turnstile is rich in features and is not like what you might see in a subway or theme park. Thick but aesthetically pleasing glass panels combine with the stainless steel for a sleek and modern look without sacrificing security. Critically, such a system should comply with COVID restrictions for years to come as it requires no person to person handing of credentials, or even person to contact point.

Security Technology of South Texas is one of the area’s most experienced and professional teams in physical security, access control, and surveillance. If you would like an assessment made for your business, please contact us at 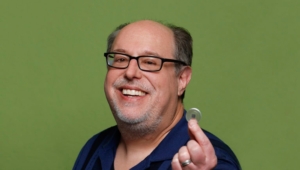 Conventionally, the sensor devices at the edge of our cloud infrastructure have been pretty dumb. With limited computational resources and greater focus being on moving data to the cloud to be processed, these devices are limited in their provision of privacy as well. Moving into this next decade, the company “Perceive” aims  to become a major player in providing data-center level computation at the network edge.

The teams working on these devices employ machine learning and neural networks to build and deploy software and tools for a chip they call “ergo”.  The “objective of [their] effort…is trying to upgrade the whole idea of the sensor into something [they] call a ‘perceiver’”. Rather than a dumb device that streams up pixels or audio, these devices will be able to perform data-center class operations on that data and show the user the results of those analytics.

Doing this reduces the amount of power required to stream to the cloud, but critically preserves the privacy of the user through never allowing any raw data to leave the device where is is most susceptible to attack and compromise.There are a great number of articles out there detailing hacks into people’s smart home devices such as Amazon Echo and Google Home via their smartphones. In one instance, Amazon employees were sending each other videos of people inside their residences. And certainly governments domestic and foreign alike love to see lax or non-existent security as they expand the ever-growing surveillance states.

Only recently has it become technically possible to perform these high level computations on edge devices, and the strategy for privacy used to be an afterthought. The combination of mil-spec privacy and encryption, machine learning and hardware and software are setting these devices to give the notoriously open and unprotected cloud-based systems a run for their money. The major advantage of performing computations for analytics locally is that it isolates that data and makes situations like spying or hacks much more difficult to pull off.

The device itself is a diminutive 7X7 millimeters or about the size of a shirt button. Due to not needing external memory, the device is ideal for very small, battery operated gadgets and larger devices as well. The goal is for this technology to become so ubiquitous that anything and everything than can have a perceiver will. While this sounds a lot like the dream sold to us about 5G, the difference here is the security focus and not being web-connected. By effectively being “air-gapped”, the items containing perceivers would be un-hackable barring physical theft of the item.

The first items the company wants to focus on are, logically, security cameras and IoT home devices. Eventually they see expansion into appliances, drones, and even clothing and food items. At this moment, there are 25 billion sensors on Earth, and it is estimated that by 2025 there will be 1 trillion. This number is over 100 times as many people as are on Earth, and it makes sense to want to protect certain things from attack by not connecting them to the cloud. However, without internet connection, services like monitoring by humans would have to be performed in-house or by machine learning algorithms. It is still to be seen what the impact of these types of security focused “perceivers” will be.