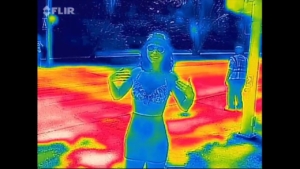 Once solely the province of police and military units, thermal imaging technology has seen a rapid adoption by the commercial security industry in the last decade. Thermal cameras give us the ability to see what our eyes cannot, and provide data that would never be available to analytics software with traditional devices.

Through imaging of invisible heat radiation given off by any object absorbing and reflecting light, irrespective of lighting conditions, these cameras allow us to see not just into dark rooms and outdoors at night, but also through foliage and semi-permeable objects such as netting and meshes.

As security cameras have become the staple for protection of property and personnel across every industry, the demand for better and more varied methods to produce high quality imaging in any setting has grown.

.Work in the darkest of low-light scenarios

.Can see through foliage at night

.Are immune to visual limitations

Thermographic or Infrared (IR) cameras create images using IR radiation as apposed to the visible light used in conventional cameras. Basically, what this means is that they are able to “see” heat as it radiates from an object and then display the differences in heat within its picture as various shades of grey in black and white video. Thermal cameras are therefore able to see through objects when a heat source is inside, require no light, and are not affected by things like smoke or dust.

Thermal cameras can be used to great effect in outdoor and low-zero light settings. This makes them particularly easy to camouflage, if desired. In many cases an IR camera could be used entirely in place of a traditional one, especially if it is being used to trigger an alarm and not just for surveillance.
IR is something that can be integrated into existing systems. It is especially helpful in analytics due to its ability to generate high contrast images.

The high-contrast, black and white images provide another metric in an entirely different spectrum of light for the algorithm of the analytics software to perform its operations on.

Analytics is already used to similar effect in systems with conventional cameras only, but being able to match heat signature against already existing video analytics creates a more robust and reliable overall surveillance operation.
Most importantly, a system can be set up to trigger only on the heat signature of a person, whereas the heat signature of an animal would be ignored.

To learn more about how thermal imaging cameras can help protect your commercial facility, please contact: