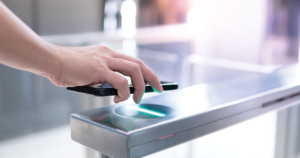 Nonautomated physical attribute identification systems have long been the primary method of verifying the identity of a person: the signature (as used on personal checks and credit card slips); the fingerprint (as used by the FBI); pictures (as used on ID badges, passports, driver’s licenses, which have become the preferred form of identification for banking and credit transactions);and, to a limited extent in some criminal proceedings, the voiceprint. Digital Network Architecture may be next.

The equipment that is now available for access control in some cases measures the physical attributes that are well-known and of accepted legitimacy, and in others relies on attributes that the manufacturers themselves have represented as being unique. A discussion of the current offerings follows; other techniques will doubtless come and go.

There has never been a fully automated system using the face as a physical attribute, although for twenty years semi-automated systems have been available that store a person’s picture on microfilm, videotape, videodisk, or digital memory. Such systems are a sort of nonportable picture badge, with the image retrieved by an automated identification means such as a card or a PIN. Another simple and economic form of face-based non-automated access control that has become popular is the video intercom, which was originally developed for entry lobbies in apartment buildings. This device allows the occupant to both speak with and see the face of a visitor before opening the door (usually electronically).

The signature is the basis for personal identification in hundreds of millions of financial transactions every day. There are machine-assisted methods for presentation of a stored signature image to the bank teller, but these are not used for access control. There has never been a fully automated system for signature comparison, although for twenty years there have been fully automated systems that are based on the manner in which the person writes the signature (e.g., pressure, acceleration, speed), rather than on the appearance of the finished signature.

Fully automated fingerprint access control systems have been marketed for 25 years by a continually changing series of unsuccessful vendors originally driven by work for the FBI and the Air Force. The technology is similar to that used in the FBI fingerprint search operation, which makes 15,000 searches a day through a file of 25 million prints. Fingerprint-based access control can be installed for a price that is little more than that for a top-end card access or proximity system.

Hand geometry as a unique physical attribute stems from a 1971 study by Stanford Research Institute on the efficiency of manufacturing and inventorying gloves for Air Force pilots. An access control system based on this physical attribute was introduced in 1972. It was successfully sold and widely used under the aegis of several companies, but was abandoned by a major player in the security electronics field in 1988 as a business area not worth pursuing. New systems are on the market today, at prices that are competitive with those for card access systems.

Voice recognition was the subject of extensive research activities in the early 1970s, but no serious voice-based products were marketed until the late 1980s. Voice input has a natural cost advantage over other physical attribute-based access control systems in that the data-entry mechanism is an inexpensive telephone handset and the workings are all electronic. However, it has suffered from suspicions of unreliability and fear of being easily outwitted by recording and playback devices, and from government reports openly stating these concerns. There have been a number of products on the market from time to time, at prices competitive with those for card access systems. One rudimentary form of voice-access control is the telephone entry system, which is actually a machine-assisted voice-plus-keypad system. Like the video intercom, it is intended for multi-unit residences and requires that the person on the inside recognize the voice of the prospective admittee.

Other systems analyze the patterns of blood vessels on various portions of the human anatomy. One system that was introduced in 1983 is based on the conclusion of a 1935 medical paper that the pattern of the blood vessels on the retina of the eye is unique. Another uses the blood vessels on the wrist. A question is legitimately raised about whether any one physical attribute provides a more dependable basis for identification than the others. Fingerprints certainly have the most solid legal precedent and endorsement through long-term use, and there is only one chance in a billion that two randomly selected fingerprints will match. Signatures are also well accepted as identification for financial transactions. Voiceprints have acquired some legitimacy in the courts. Faces have never been measured in an automated identification system. The uniqueness of the other attributes is validated only by the claims of the companies that sell the equipment. In practice, however, all of the products have accuracy rates in the one-in-a-thousand category because of the problems in measuring the attribute, and no attribute has been demonstrated to be superior.

These methods of biometric access control can be paired with other forms of authentication such as PINs, passwords, proximity or I-class cards to add another layer of assurance. Because biometrics are still not at the point of 100% accuracy, the room for error they leave necessitates, generally, the use of another method in conjunction with them. In the near future however we can expect the accuracy of these methods to improve and eventually become primary access control measures.

Security Technology of South Texas is a local leader in access control, video surveillance, and community management systems in the South Texas area. Get in touch with us today to see what we can do to help secure your location.